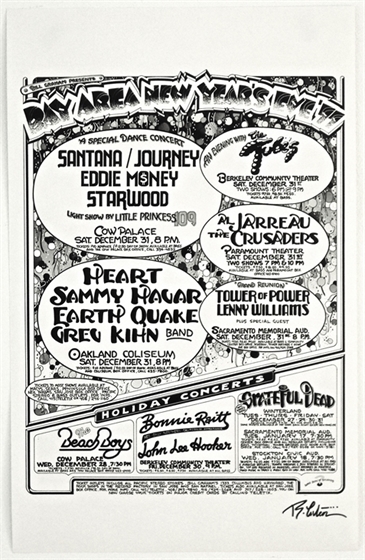 Shows listed include: Grateful Dead at Winterland in San Francisco from 12/27-31/1977, at Sacramento Memorial Auditorium on 1/17/1978 and at the Stockton Civic Auditorium on 1/18/1978; Bonnie Raitt and John Lee Hooker at the Berkeley Community Theatre on 12/30/1977; the Beach Boys at the Cow Palace in San Francisco on 12/30/1977 and the following shows all held on 12/31/1977; Santana, Eddie Money, Journey and Starwood at the Cow Palace, the Tubes at BCT, Al Jarreau and the Crusaders at the Paramount in Oakland, Tower of Power and Lenny Williams at Sacramento Memorial Auditorium and Heart, Sammy Hagar, Earthquake and the Greg Kihn Band at Oakland Coliseum.

Art by (and SIGNED in black sharpie by), Randy Tuten, medium glossy-coated index stock poster is in mint/near mint to near mint (A/A- to A-) condition; a SUPERB-looking example of this late-'70's oddball BGP poster featuring a pretty wide variety of performers.

According to an attendee of the 12/31 Dead show, small handbills were passed out that said, "Good things come to those who wait. Midnight will happen tonight at 12:30. Be prepared!"; apparently Bill had to be at the Cow Palace to ring in the New Year at the Santana show before heading over to Winterland. (*Thanks Doug!)