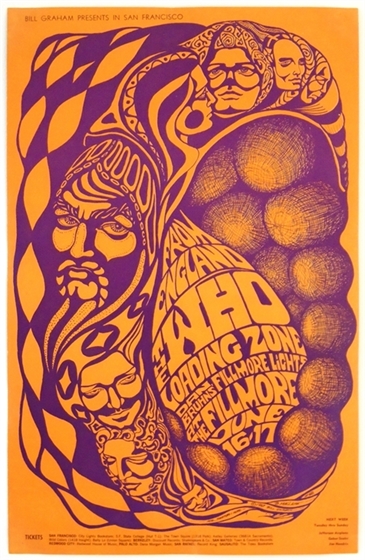 Original 1st printing 14 x 22" concert poster for the Who (*1st appearances after Monterey Pop) appearing with Loading Zone (who were replaced on the second night by the Santana Blues Band) at the Fillmore Auditorium in San Francisco, CA from 6/16-17/1967.  (*also mentions the following weekend shows featuring Jefferson Airplane, Gabor Szabo and Jimi Hendrix in the lower right corner)

Art by Bonnie MacLean, image is # 68 in the Bill Graham/Fillmore series.

Medium flat index index stock poster has been professionally restored to excellent (B+) condition; all four corners and the top/bottom center margins have been repaired (as to what the initial damage was, I can't tell), along with a bit of work on the reverse side to cover up/reinforce surface pulls and possible stain removal (there remains a slight horizontal warp to the paper) and there are a series of hairline-thin flattened horizontal stress creases hiding within the image area, but it looks pretty nice from a presentation standpoint.

An overall SUPERB-looking 1st printing example of the VERY FIRST Who poster from the band's 1967 San Francisco debut.