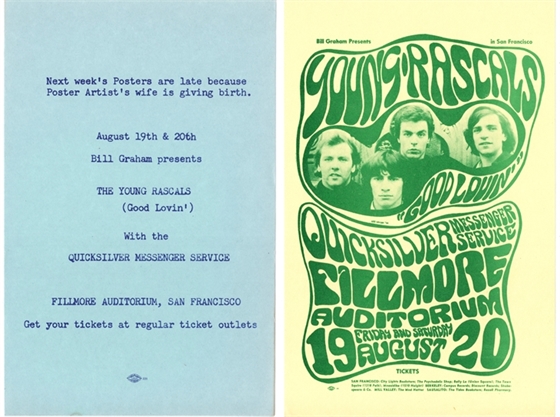 Pair of original 1st printing 5&1/2 x 8&1/2" concert handbills for the Young Rascals appearing with Quicksilver Messenger Service at the Fillmore Auditorium in San Francisco, CA from 8/19-20/1966.

Art by Wes Wilson, image (green/yellow) image is # 24 in the Bill Graham/Fillmore series (OHB-A  in the Eric King guide); the type-only interim handbill is currently undocumented in the King guide, but is featured on page 87 of "The Art of Rock";

Thin flat stock handbills are both in near mint (A- to A-/B+) condition; there is a touch of toning along the right margin of the interim handbill and there may be a stray handling ding or two on both of them, but overall the set is VERY sharp/crisp.

Neat little pair of original 1966 Fillmore handbills, you get two-for-one with this set!