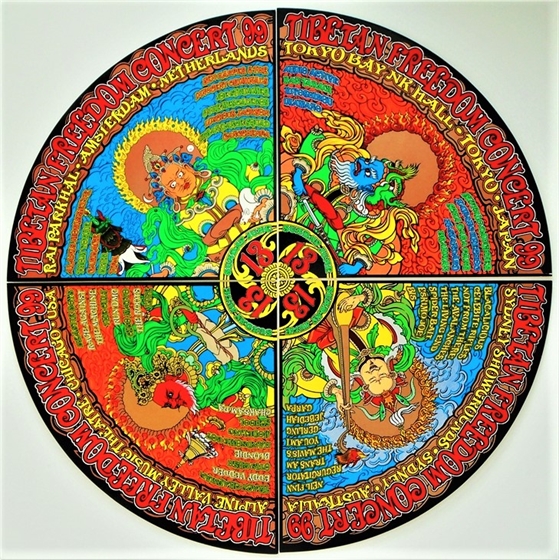 Art by Chuck Sperry, Alan Forbes, Ron Donovan and Chris Shaw (each contributing one panel*), thick glossy stock hand-pulled silkscreen posters (printed with a combination of extra-thick enamel, day-glo and glitter inks) is in excellent (B+) condition; a couple of the wedges have small surface glitches (tiny surface scuffs, pin-prick chips/scrapes and light scratches), in addition to tape residue shadows/tiny scuffs/pin-prick spots on the reverse sides of all of them, but the set as a whole is absolutely STUNNING. *Chris Shaw and Chuck Sperry have signed the reverse sides of their respective panels in silver paint pen

INCREDIBLE-looking Buddhist-mandala themed set of silkscreens from the third edition of the semi-annual benefit concert for Tibetan independence. According to the Expressobeans page on this one, these sets were never officially released;

"According to Chuck Sperry, 250 prints were made - unsigned and unnumbered.
This poster was never released to the general public. This poster was commissioned by the Tibet Freedom Concert, and was intended to be the official limited-edition event poster. After production began 2 typos were found that made it through the approval process (EDDY VEDDER and BLACALICIOUS), as it was too expensive and tedious to remake this hand-made art, the poster was never released and the full edition was never printed. However, to fulfill agreements with the artists, enough of the full sets were completed so each artist got a small amount as well as the show organizers and a few performers. VERY FEW of these posters have made it into circulation.
Each poster is a quarter circle "wedge" approximately 18" x 18", together the 4 posters create a circle approx. 36" x 36". Each of the 4 "wedge" sections was designed by a different ART of MODERN ROCK poster artist: Alan Forbes, Chris Shaw, Chuck Sperry and Ron Donovan. Each section was hand-silkscreened separately in 8 colors in 1999 by the Firehouse Kustom Rock Art Co. including fluorescent and metallic inks and die-cut. All color separations were tediously cut by hand, by the artists.
The 1999 Tibet Freedom Concert was actually 4 concerts held at 4 venues worldwide on June 13, 1999. Each poster "wedge" represents a different concert venue and Tibetan directional deity: North/Amsterdam by Alan Forbes, South/Sydney by Chuck Sperry, West/Chicago by Ron Donovan, East/Tokyo by Chris Shaw."

Here's 12 minutes of pro-shot footage from Rage Against the Machine's set at Alpine: