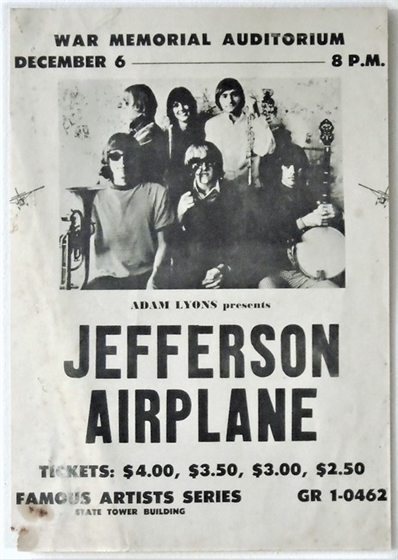 Designer unknown (based around the 1967 "Surrealistic Pillow" promo photo by Herb Greene), medium-thick textured vellum stock poster is in used (B-) condition; aside from the aforementioned left/right edge trimming, there is a fairly heavy amount of surface/moisture wear, mostly along the lower left margin/corner, along with a couple of large rust-stained staple holes in the lower left corner, numerous tiny pin-prick moisture spots, a few randomly-placed staple holes (mostly along the left margin), a small chunk of paper missing from the lower left corner tip... definitely a well-worn survivor, definitely removed from public display in late-'67.

Conditional issues not withstanding, this is a pretty scarce J.A. artifact from a fairly obscure show; the show itself is missing from at least one J.A. database, but I did see supporting evidence in the form of a newsprint ad, so the show was definitely scheduled in advance and more than likely happened.