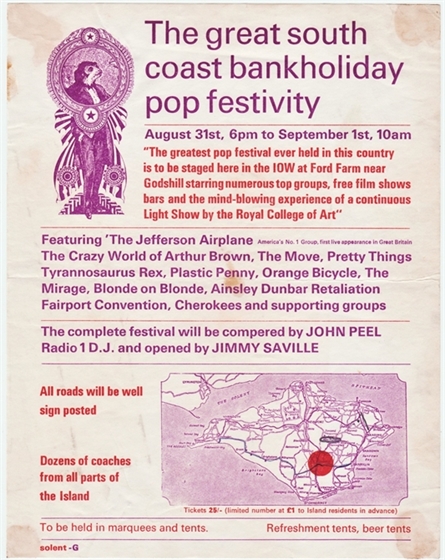 Original 1st printing 7 x 9" single-sided concert/event handbill for "The Great South Coast Bankholiday Pop Festivity", otherwise known as the first Isle of Wight Festival, held at Hell Field, on Ford Farm (near Godshill) on the Isle of Wight off the southern coast of England from 8/31-9/1/1968.

Designer unknown/not credited, thin flat stock handbill is in decent/used (B/B- to B-) condition; there is a semi-flattened horizontal center crease with a small oil stain in the center of the fold (right in the middle of the band listings), plus a quartet of brown glue residue stains in all four corners on the reverse side that are just starting to peek through the paper, a few tiny surface scuffs, a light pen scratch on the map at the bottom, a couple of loose handling/stress bends and tiny surface indentations, otherwise OK... definitely not perfect, but SUPER uncommon/scarce- this is the first example of the inaugural '68 event handbill that I have ever offered, it does not turn up very frequently at all. This handbill also marks the first-ever British performances by Jefferson Airplane.