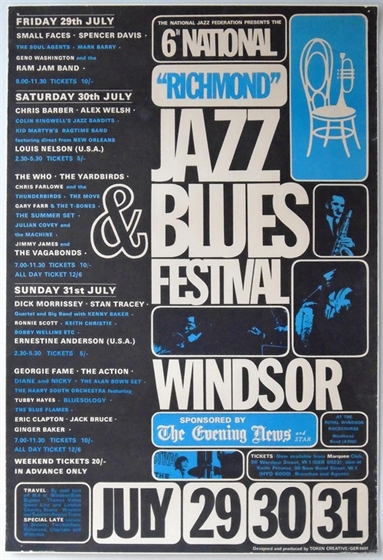 Design by Token Creative, poster lists appearances by a who's who of British (and some international) talent, including: Cream (*who are listed individually by name (Eric Clapton, Jack Bruce and Ginger Baker), as the band had yet to be named at the time the poster was printed), the Small Faces, the Yardbirds (*with Jimmy Page and Jeff Beck), the Who, the Move, the Action, Spencer Davis (*Group, with Steve Winwood), Georgie Fame, Geno Washington and the Ram Jam Band and MANY more.

Thin vellum stock poster is in good/decent (B to B/B-) condition; the poster was originally mounted to foamcore, which was removed, leaving behind a thick rough-reverse backing sheet for stability; beyond that, there are a series of light handling/stress creases throughout, plus a few tiny edge nips/tears scattered around the outer margin area, a set of tack holes/tiny diagonal corner-tip creases in all four corners, a couple of light surface scuffs/thin scrapes and a touch of toning, otherwise it is a very presentable/displayable example overall.