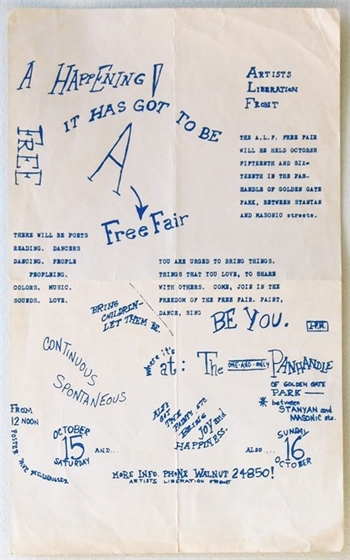 Original 1st printing 8&1/2 x 14" oversized event flyer for the Artist's Liberation Front Free Fair, a Digger-sponsored/conceived event held at the Panhandle (in between Stanyan and Masonic) in San Francisco from 10/15-16/1966. Although no acts are listed, there were appearances by the Grateful Dead, Quicksilver Messenger Service and Country Joe & the Fish.

Art by Dave Millhauser, thin flat stock oversized flyer is in very good to excellent (B/B+ to B+); aside from a set of flattened horizontal/vertical folds, a few stray handling creases/thin bends and a tiny edge tear or two scattered around the outer margin area, it is a pretty sharp example overall.

According to the very fine "Hooterollin' Around" blog; "A two-day festival was held on Saturday and Sunday (October 15-16), with the major San Francisco bands playing for free in the Panhandle. It's not clear which day the Dead appeared, but logic seems to suggest that it was Sunday, October 16."

"On the 6th of October there was a rally in the Golden Gate Park Panhandle with the Grateful Dead, Big Brother & the Holding Co., and the Wildflower, followed last Sunday [the 16th] by another Panhandle festival, the Artists Liberation Front’s Free Fair. Bands appearing were the Quicksilver Messenger Service, the Grateful Dead, Country Joe and the Fish... After the Fair, the Family Dog held its first anniversary dance at Avalon, with Big Brother & the Holding Company... Jerry Garcia played one song with the Holding Company..." (Mojo Navigator)

INCREDIBLY SCARCE early Grateful Dead Haight-Ashbury neighborhood artifact from the fall of 1966, right after the band took up residence at 710 Ashbury.