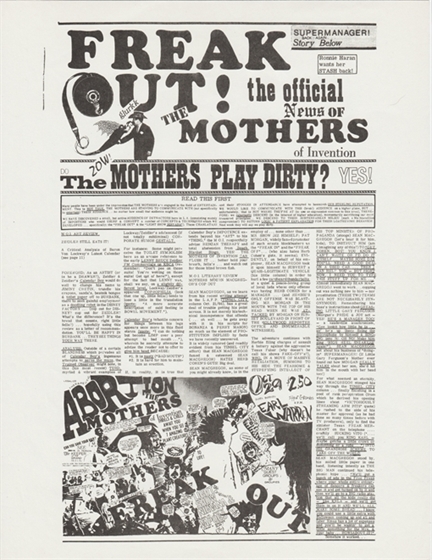 Designer unknown/not credited (allegedly Zappa himself), thin flat stock flyer is in near mint (A-/B+) condition; aside from a light amount of handling wear and a nerly-invisible bend in the upper right corner it is a fairly sharp/clean example of this early Mothers concert artifact from Southern California.

The flyer ("Freak Out! -the OFFICIAL News of the Mothers of Invention) is highlighted by a very creatively written "op-ed" piece describing the Mothers-headlined, Pat Morgan-produced "Freak Out" show held at the Shrine Expo Hall a few weeks before this show; the author (again, rumored to be Zappa) name-checks several people involved with the promotional side of the event in a very unflattering and descriptive manner.... an interesting read, to say the least.