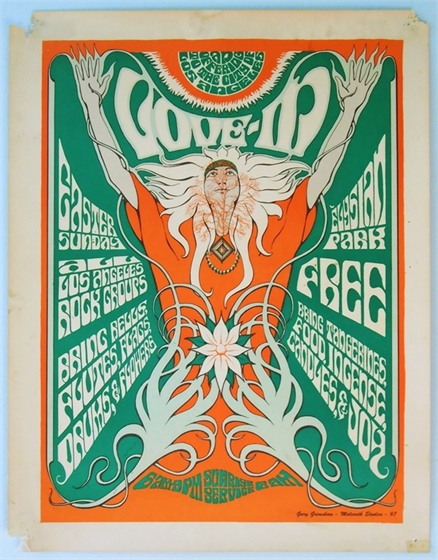 Although no acts are listed, there were performances by the Peanut Butter Conspiracy, Clear Light, Strawberry Alarm Clock, Flamin' Groovies, the Steve Miller (Blues) Band (introduced by Chet Helms!) and more.

Medium-thin flat index stock poster is in decent/used (B/B- to B-) condition; three out of the four corners have small areas of missing paper and multiple pin/tack holes (lower right corner is intact, but covered with a piece of tape, as well as having a couple of additional pin/tack holes), along with a couple of small edge tears along the outer margin area, light to moderate edge toning, a series of tiny stress creases/pin-prick spots scattered throughout the image area, tape pulls and smudging on the reverse.... definitely a bit on the used side, but the image area still looks pretty nice overall.

A fairly used, but still presentable example of this semi-uncommon non-Michigan Grimshaw poster from 1967, one of his first out-of-town commissions. Filmmaker Les Blank released a short film of the event in 1968 called, "God Respects Us When We Work, But Loves Us When We Dance"- check out some of Les' original footage HERE: