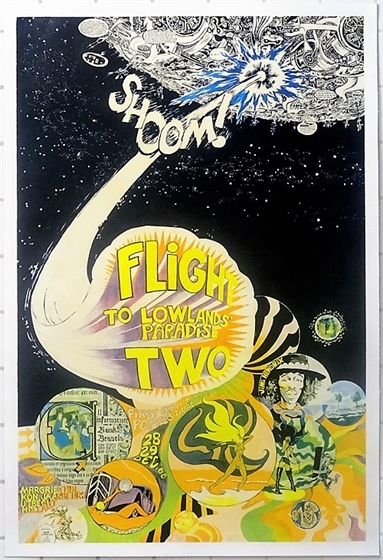 *This example is missing the final red pass of ink; apparently the printer ran out of red at some point during the run and printed a few examples like this one- orange/green/blue/black

Poster features a portrait of planned headliner Jimi Hendrix (*Jimi canceled), although a number of other acts did perform, including Pink Floyd, the Bonzo Dog Band, the Pretty Things and a number of Dutch acts.

Design by Arne Zuidhoek, glossy textured stock poster has been professionally restored to very good to excellent (B/B+ to B+) condition; in addition to the linen backing, there are a number of repairs/touch-ups around the outer margin area and within the image area- this poster was originally taken down from public display at the time of the event, apparently it had a number of other items affixed to the surface that had to be removed, leaving behind a couple of minor shadows and slight discolorations here and there, but most of the restoration work is fairly well-camouflaged.