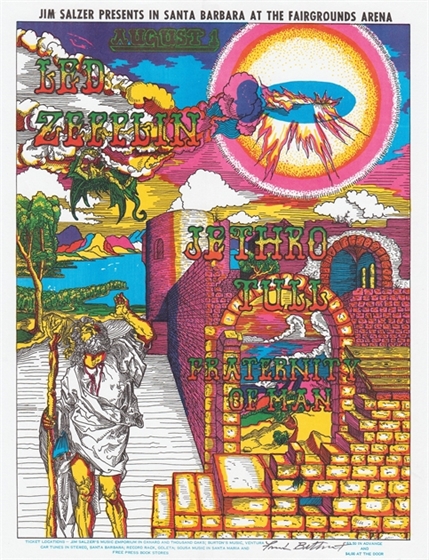 Original 1st printing 8&1/2 x 11" concert flyer for Led Zeppelin appearing with Jethro Tull and the Fraternity of Man at the Earl Warren Showgrounds Arena in Santa Barbara, CA on 8/1/1969.

Art by (and SIGNED in black pen by) Frank Bettencourt, image is featured in the Art of Rock book on page 267 (plate 3.41) and is part of the Jim Salzer Presents series.

Thin flat stock flyer is in SPARKLING mint/near mint to near mint (A/A- to A-) condition; just a couple of extra-tiny soft pinch bends hiding within the image area, but they are REALLY hard to see.

An UNBEATABLE ARTIST-SIGNED example of this original 1st printing 1969 Zeppelin flyer from a very early Southern California appearance. The poster turns up from time to time, but this is the first example of the thin-paper flyer that I have come across; check out a great informative list of 1960's-era shows (including this one) that took place at the Earl Warren Showgrounds: