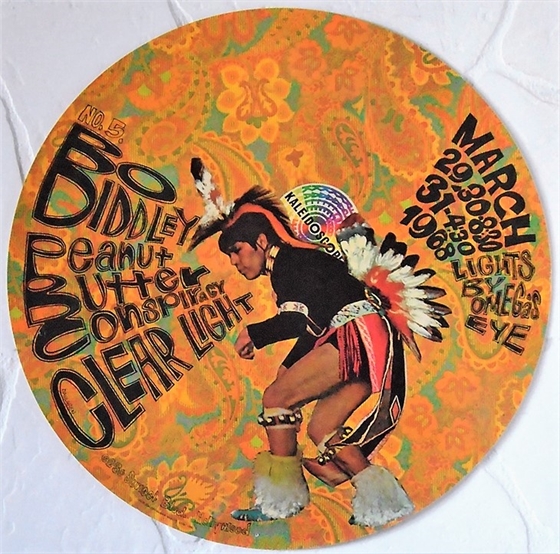 Original 1st printing 18&1/2" diameter round concert poster for rock & roll pioneer Bo Diddley appearing with Peanut Butter Conspiracy, Clear Light and the Doors (*not listed, 3/29 only) at the Kaleidoscope in Los Angeles, CA from 3/29-31/1968.

Medium-thick vellum stock poster is in good (B) condition; there are numerous tack holes spread evenly around the borders and a few hiding within the image area, along with a few well-camouflaged light handling dings/stress creases and a pair of fairly large tape pulls on the reverse, otherewise fine. Most of the conditional issues on this one are pretty well obscured by the density of the design, it presents much better than it sounds.

AWESOME-looking early-1968 poster from the Kaleidoscope (one that I have never had up before, this is the first), I just recently found out that the Doors showed up on opening night... how cool is that? Check out this great informative list of shows (including this one) held at the Kaleidoscope in 1968: