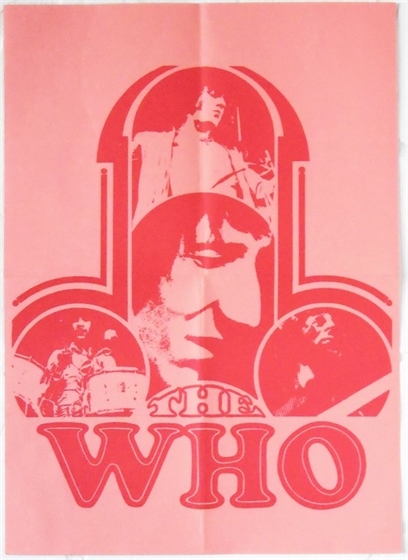 Original 1st printing 16 x 22&3/8" double-sided fold-out tour program/poster for the Who appearing with the James Gang (featuring Joe Walsh). Assumed to have been used/distributed at several shows on the band's Fall 1970 UK Tour, this particular example was obtained at the 10/10/1970 University of Sussex show.

One side features a quasi-phallic photo collage of Pete, Roger, John and Keith, while the reverse features bios of both bands, along with a short bio of opening act Roger Spear and his Giant Kinetic Wardrobe (a Bonzo Dog Band offshoot), along with an ad for (Pete Townshend-produced) Thunderclap Newman (on Track Records) and Polydor Records.

Designer unknown, medium-thick flat vellum stock poster/program is in excellent (B+) condition; there are horizontal/vertical machine creases (as issued, folded into 1/8hs), along with a few light handling dings here and there, a 5" vertical stress crease extending from about 4" in from the upper left margin down to the right of Pete's shoulder (a paper flaw, inherent to the paper itself) and a few tiny surface smudges and a otherwise fine.

A VERY unusual oddball Who concert item from the Fall 1970 UK tour, read about the show HERE: