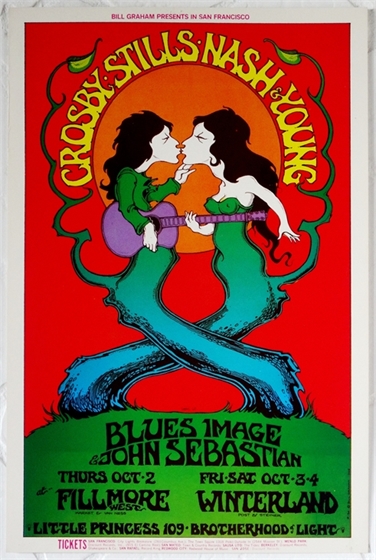 Original 1st printing 14 x 21" concert poster for Crosby, Stills, Nash & Young* (canceled, replaced by Janis Joplin and the Kozmik Blues Band) appearing with the Blues Image and John Sebastian at the Fillmore West and Winterland in San Francisco, CA from 10/2-4/1969.

Art by Greg Irons, image is # 194 in the Bill Graham/Fillmore series.

Medium glossy coated index stock poster is in excellent (B+) condition; there are tiny "cub" staple holes in the top center margin and in the lower left/right corner tips, along with a tiny bit of pen scratch on the reverse, a thin vertical roll crease running down the outer edge of the upper left margin, a nearly-invisible handling ding or two and that's pretty much it... a VERY nice-looking example.

While this show did not happen exactly as advertised (CSNY had to cancel due to the death of Christine Hinton, Crosby's girlfriend, on September 30th), the band came back and made up the dates in late November (the BG 200 shows).