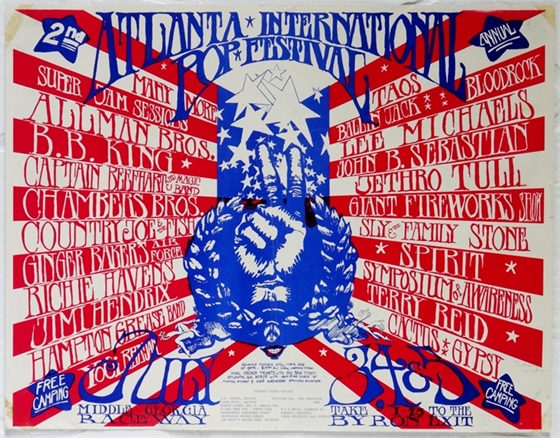 Original 1st printing (2nd state, this is the first version printed on paper and sold onsite at the event) 22&1/2 x 17&1/2" concert/event poster for the 2nd Atlanta International Pop Festival, held at Middle Georgia Raceway in Byron, GA from 7/3-5/1970.

Art by Lance Bragg, the 3rd state/final version image (with additional artistic embellishments) is featured in the Art of Rock on page 390 (plate 4.178). This version is closer to the 1st state cardboard version, but there are several differences- the most obvious being the large red stripping error behind the fingers that extends from the "Chambers Brothers" and "Giant Fireworks Show" bars, along with the hand-written (in blue ballpoint) addition of "Johnny Winter".

Medium-thin glossy stock poster is in good (B) condition; there is a fairly large vertical crease running down the center of the poster, along with tape residue marks in the corners, a moderate degree of handling wear, a series of well-camouflaged stress bends throughout, a light amount of edge/corner creases and a couple of light pulls on the reverse, otherwise it's not all that bad- especially when you consider this example was actually procured at (and managed to survive) the Festival itself (consignor picked it up at the event).

REALLY, REALLY SCARCE onsite version of the 2nd Atlanta Pop poster- I have seen several cardboard versions and a BUNCH of the 3rd state versions, this is only the SECOND time I have seen one of these in 25 years.