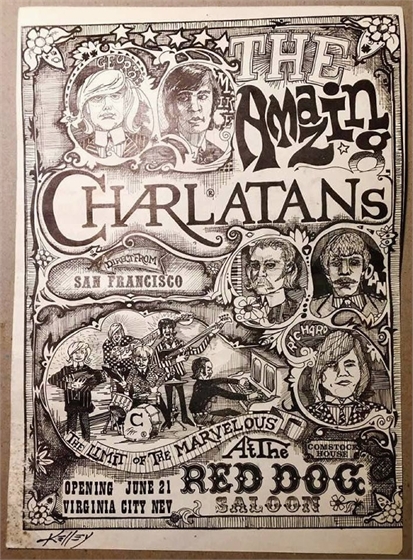 Art by George Hunter and Michael Ferguson, image is featured in the Art of Rock on page 89 (plate 2.1). Interestingly enough, this example has been hand-signed in black pen by the late Alton Kelley; it would appear that he had some kind of input on the design of the poster, but I can't confirm what exactly it was.

Medium flat index stock poster is in decent (B/B-) condition; as the plate shifted during the printing process, the entire image has been printed about 10 degrees off-register, which slices off the lower right border of the central image and creates a very large left margin, along with irregular top/bottom margins (despite the appearance, the edges are all intact and aside from the rounded bottom right corner tip, it does not appear to have been trimmed); there are also semi-pronounced horizontal/vertical folds, a 2-3" area of pin-prick mold spotting/wear in the lower left corner, tack holes in the top/bottom center margins, a few stray handling dings/tiny creases, light stains on the reverse, etc... this one has definitely been around the block a few times, but it's the real-deal.

Wonky printing aside, a fascinating original 1st printing example of the second-state "Seed" poster, signed with approval by Kelley!