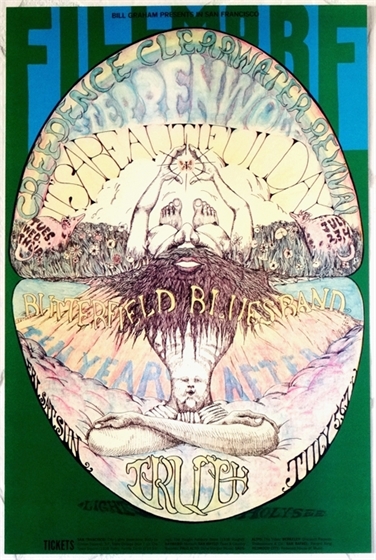 Original 1st printing 13&7/8 x 21&1/8" concert poster for Creedence Clearwater Revival, Steppenwolf and It's A Beautiful Day appearing together from 7/2-4/1968 at the Fillmore Auditorium and the Paul Butterfield Blues Band appearing with Ten Years After and Truth (*canceled, replaced by Fleetwood Mac) from 7/5-7/1968 at the Fillmore West (formerly the Carousel), all shows held in San Francisco, CA.

Art by Lee Conklin, image is # 127 in the Bill Graham/Fillmore series.

Medium flat index stock poster is in BEAUTIFUL mint/near mint to near mint (A/A- to A-) condition; an overall SUPERB crisp/clean example of this very weird-looking mid-'68 Fillmore poster.

The CCR/Steppenwolf shows marked the end of Bill Graham's proprietorship of original Fillmore Auditorium, while the Ten Years After/Butterfield shows were the first shows at the Carousel/Fillmore West under BGP's direction.... a transitional poster.