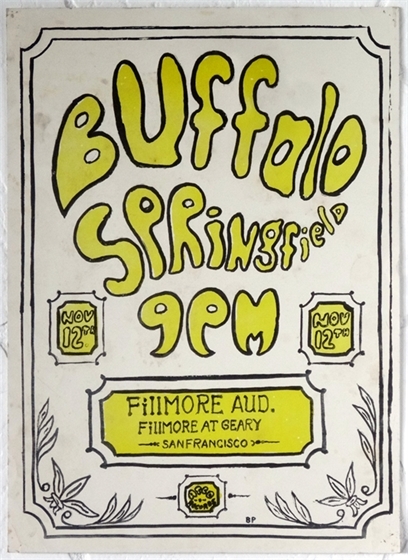 Art by "BP" (Springfield bassist Bruce Palmer), image is a band generated/distributed ALTERNATE image to # 36 in the Bill Graham/Fillmore series (the middle show in the 11/11-13/1966 run of shows headlined by Bola Sete and Country Joe & the Fish).

Medium-thick flat vellum stock poster is in good to very good (B to B/B+) condition; there are staple holes in all four corners, along with a series of tiny creases and thin bends scattered around the outer margin area, a few VERY light pin-prick surface stains and soft smudges scattered throughout the image area (mostly around the outer edges), a couple of thin corner bends and a fair amount of age spotting/"foxing" on the reverse, otherwise fine.

INCREDIBLY SCARCE Buffalo Springfield item from the band's first-ever visit to the Fillmore, these posters were issued in several different color stocks (all equally hard-to-find), presumably as an intended showcase for the (at that point) quickly-ascending-band.