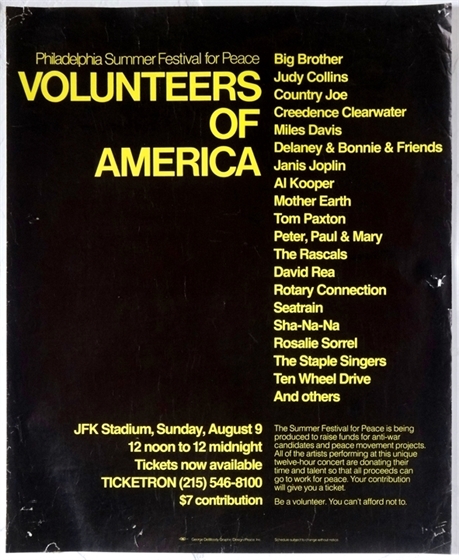 Design by George DeWoody, thin glossy stock poster is in good/decent (B to B/B-) condition;  there are a series of staple holes and tiny wedge tears in all four corners and in the left/right margins, along with a few stray small edge tears, a series of edge dings/nicks/tiny nip tears scattered around the outer margins, a light to moderate amount of handling wear/stress creasing, a couple of thin diagonal corner bends and tape pulls/masking tape remnants on the reverse... it's a bit on the used side, but as it was removed from public display in 1970, it has held up pretty well.

REMARKABLY SCARCE multi-act poster from a show that was intended as a "sequel" of sorts to the 8/6/1970 New York Peace Festival at Shea Stadium (which was also organized by Peter Yarrow of Peter, Paul & Mary and featured several of the same acts (Janis Joplin, Big Brother, Creedence Clearwater Revival, the Rascals) listed on this poster). As the event was scrapped, I am assuming most of the posters were as well.