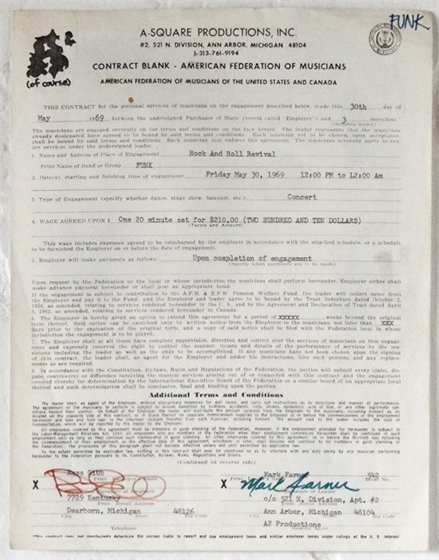 Original 1st printing 8&1/2 x 11" A-Square Productions/American Federation of Musicians double-sided typed contract for the appearance of Grand Funk Railroad ("Funk") at the Detroit Rock & Roll Revival on 5/30/1969. Contract has been HAND-SIGNED by both the promoter (Russ Gibb, in brown flair pen) and band leader (Mark Farner, in green marker).

Thin flat stock contract is in good/very good (B to B/B+) condition; as it is a piece of heavily-trafficked office material, there are a number of creases, flattened bends, tiny stains and other wear, in addition to a hand-written notation in the upper right corner ("FUNK" in blue marker), a tape pull on the reverse top margin and a couple of other fairly negligible issues, but as a one-of-a-kind 51-year-old piece of heavily-handled correspondence, it has survived remarkably well.

FASCINATING original piece of Detroit/Russ Gibb/Grand Funk ephemera, including details about set length (20 minutes!) and fee (all of $210), in addition to all of the usual AFM boilerplate. This was SO early in the career of GFR, they apparently hadn't even added the "Grand" or "Railroad" to their name yet!