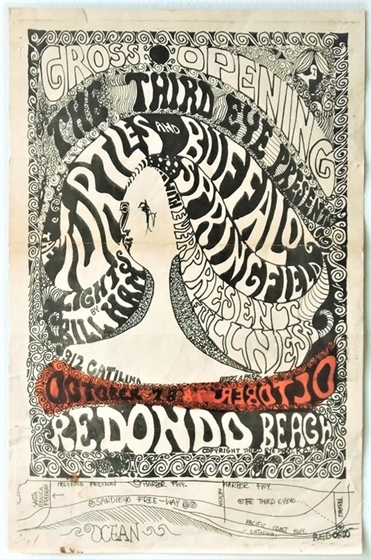 Art by Robert A Park, medium-thin textured stock poster is in decent/used (B/B- to B-) condition; there are a series of pronounced horizontal folds/bends traversing the image area, along with a bit of flair pen scratch in the middle of the image area, light to moderate toning, a series of light handling dings/small stains/surface smudges throughout the piece, staple/pin holes in the corners, a couple of small edge tears... as you can see, this one has been around the proverbial block and was more than likely removed from public display way back in 1966.

Conditional issues aside, this is a fairly historic Buffalo Springfield artifact, as this was the location of the now-famous Henry Diltz photo shoot which had the band posing in front of the psychedelically-painted club, Neil Young in his iconic green/yellow/black sweater (see photos- c. Henry Diltz). If you look closely, the lettering on the outside of the club nearly mirrors the lettering on the poster- presumably both were painted by the same artist (Robert A. Park)... how cool is that?

This is only the second example of this poster that I have seen in over 25 years- the other one belonged to Howard Kaylan of the Turtles.