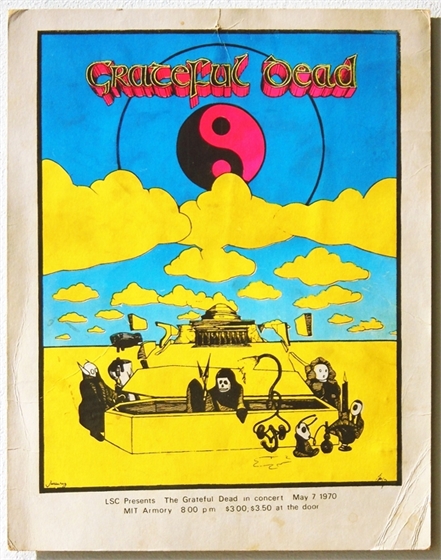 Original 1st printing 11 x 14" cardboard concert poster for the Grateful Dead appearing at Dupont Gym (M.I.T. Armory) on the campus of the Massachusetts Institute of Technology in Cambridge, MA on 5/7/1970 (there was also a free show (supporting striking students) held in Kresge Plaza the day before- see photo).

Hand-pulled silkscreen (printed on thick cardboard stock) poster is in decent (B/B-) condition; there is a single tack hole in the top center margin with a bit of creasing/wear around the hole, along with a few fairly pronounced thin bends scattered around the outer margin area and in the corners, a few tiny pin-prick surface spots lurking around the outer magin area, a touch of toning, a bit of minor corner-tip wear and a series of light surface smudges hiding within the image area; additionally, this example has a single pass of blue ink on the reverse (see photo).

An EXTREMELY hard-to-find low-run regional Grateful Dead poster from the greater Boston area. As mentioned previously, the Dead held a free show in the school's outdoor plaza the day before their appearance at the gym, here's the story behind that show, courtesy of mitadmissions.org;

On May 6th and 7th, 1970, the Grateful Dead played at MIT. Somehow, I had missed this. Luckily, my MIT contemporary, Joel '99, dropped me an email to let me know about this glaring omission. Here's the story, as I have come to understand it:

The Grateful Dead were scheduled to play MIT's Spring Concert on Thursday, May 6th. Here's the promotional poster:

Note the Great Dome in the background. The small text at the bottom reads:

LSC is the Lecture Series Committee, an MIT student group. The MIT Armory is now called duPont Athletic Gymnasium (W31). And yes, that really does say a ticket is just $3! (Even considering inflation, ~$16 is still quite a bargain!)

Recall that during the 1969-70 academic year, student unrest about the Vietnam War was at a peak. Just three days before the scheduled MIT Spring Concert, the Kent State massacre occurred. On the same day, according to The Tech, "Well over 1500 members of the MIT community, most of them students, voted overwhelmingly to strike 'in solidarity with the national university strike.'" The next day, the faculty met to affirm the community's desire for a strike. The ~700 professors at the faculty meeting voted (again) overwhelmingly to cancel classes.

Wednesday, May 6th was the first day of canceled classes -- the strike -- at MIT. With the Grateful Dead already in Boston, they came to MIT a day early to perform a free outdoor concert, joining in the student protest (although, cheekily, the "schedule of events" listing in that day's special issue of The Tech said: "2 pm - There will not be a free concert by the Grateful Dead today."). The band set up on the Student Center steps, with the crowd all across Kresge Oval.

Check out a GREAT recording of the 5/6 strike show from Kresge HERE: