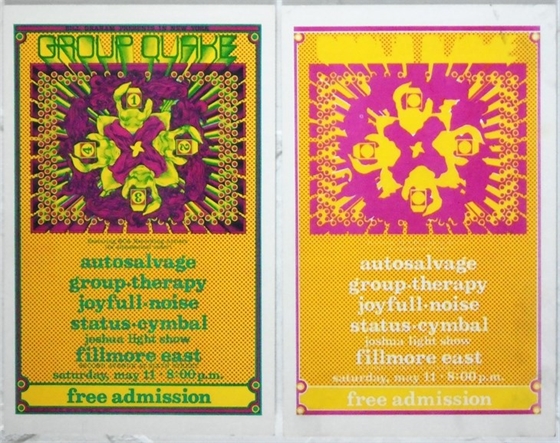 Art by David Edward Byrd, this image is not part of the numbered Bill Graham series, although it does say "Fantasy Unlimited, c.1968 Bill Graham No. 7" in the lower left corner, leading to the conclusion that this was some sort of BG-sanctioned event; it was held the night after the BG FE-7 Jimi Hendrix/Sly and the Family Stone show, and is sometimes referred to as #7(A).

Medium flat vellum card stock handbills are in near mint (A-to A-/B+, full color) and very good (B/B+, test proof) condition; both have a touch of handling and a tiny bit of surface wear, the test proof has a couple of scuff/dirt marks in the upper right corner and a couple of fingerprint smudges along the lower right margin, along with a couple of light stains on the reverse (see photo), otherwise fine.