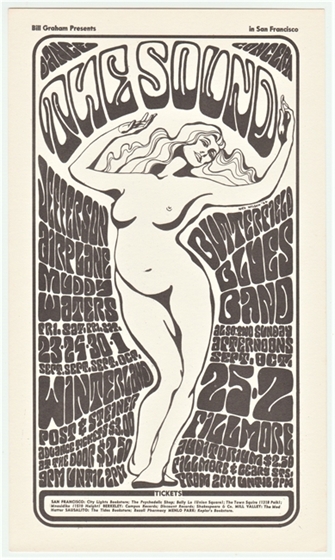 Original 1st printing (black ink/white stock, OHB-A in the Eric King guide) 5&1/8 x 8&5/8" blank-reverse concert handbill for Jefferson Airplane, the Paul Butterfield Blues Band and Muddy Waters appearing together at the Fillmore Auditorium and Winterland in San Francisco, CA from 9/23-25 and from 9/30-10/2/1966. (*Winterland shows were canceled/moved back to the Fillmore)

Medium-thin flat index stock handbill is in mint/near mint to near mint (A/A- to A-) condition;  a VERY sharp/crisp example of this classic Wes Wilson-designed handbill from Bill Graham's first extended-engagement bookings, covering two full weeks of shows; were it not for a bit of unplanned civil unrest in the neighborhood that week, these would have been the first BG Winterland shows.