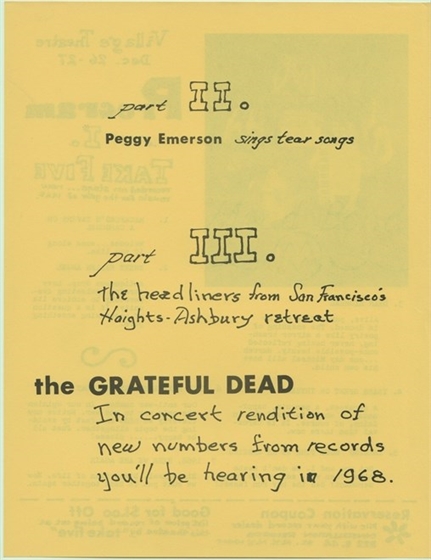 Original 1st printing 8&1/2 x 11" double-sided concert flyer for the Grateful Dead appearing with Take Five and Peggy Emerson at the Village Theater (precursor to the Fillmore East) in New York City from 12/26-27/1967.

Design by Take Five (opening band), thin flat stock flyer is in ULTRA-CRISP mint/near mint to near mint (A/A- to A-) condition; there may be a tiny pinch ding or two hiding within the image area, but to the naked eye, it looks IMMACULATE. MEGA-SCARCE Grateful Dead artifact from the band's return to the East Coast in December, from their first-ever appearance at the venue that would eventually serve as the band's de-facto home base (only a few months before Bill Graham moved in and re-christened the theater as "Fillmore East").