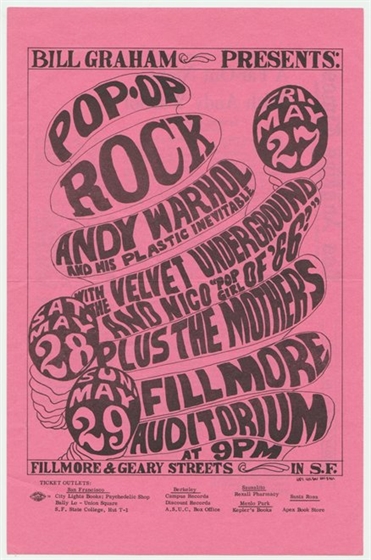 Original 1st printing 5&1/2 x 8&1/2" concert handbill for Andy Warhol's Exploding Plastic Inevitable, a multi-media show presented by the aforementioned pop-art icon Andy Warhol, featuring performances by the Velvet Underground and Nico ("Pop Girl of '66"), along with the Mothers of Invention (featuring Frank Zappa) and more, held at the Fillmore Auditorium in San Francisco, CA from 5/27-29/1966.

Art by Wes Wilson, image is # 8 in the Bill Graham/Fillmore series, this is the double-sided PINK stock version (OHB-c in the Eric King guide, the reverse side has a review (5/5/1966) from th "Los Angeles Times").

Thin flat stock handbill is in excellent (B+) condition; there is a nearly-invisible diagonal bend in the lower left margin, along with a flattened center crease, along with a minor amount of handling wear (a few stray pinch dings), a couple of VERY soft diagonal bends in the upper left corner and a touch of corner-tip toning, otherwise it is an absolutely GORGEOUS example of this early Fillmore handbill from the debut of the Velvet Underground/Andy Warhol E.P.I. scene in San Francisco.