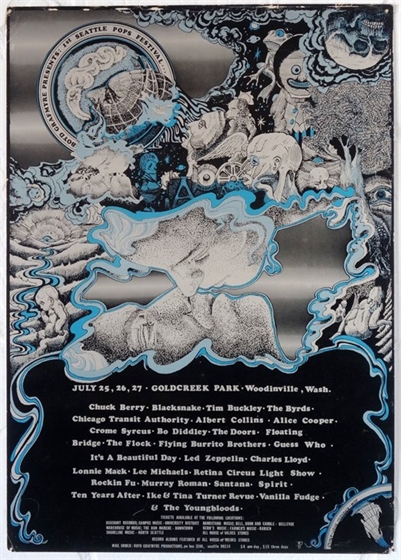 Medium-thick to thick glossy-coated index stock poster is in good/decent (B to B/B-) condition; there are multiple pin/staple holes in all four corners with a bit of wear and a couple of tiny corner-tip nips (lower left/right corners), along with a bit of moisture rippling to the paper, a series of light handling dings and tiny stress creases hiding within the image area, a series of light moisture spots that can be seen when the poster is tilted towards a light source, a series of tiny thin scrapes and dings along the top margin, a bit of staining on the reverse and a whisper of surface wear... as with every other example of this poster I have seen (including the example in the AOR), this one looks like it was put up at the time for show promotion.... not sure how may of these were remaindered, probably not many, if any.... I've never seen a mint one.

AWESOME-LOOKING and MEGA-SCARCE PNW Pop Festival item from the only documented time the Doors and Zeppelin appeared on the same bill. Here's a cool glimpse of a couple of minutes of the Doors' performance, filmed by an audience member;