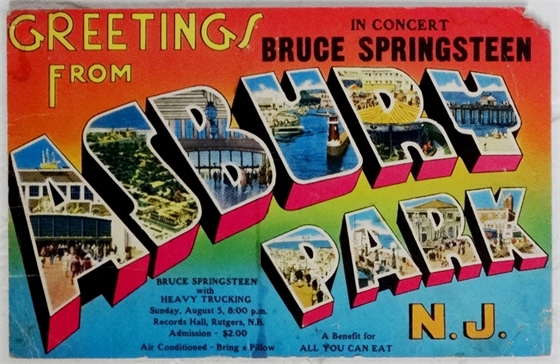 Original 1st printing 12&3/8 x 8" cardboard concert/album promo mini-poster (oversized double-sided Columbia Records "Greetings From Asbury Park" promotional postcard) for Bruce Springsteen appearing with Heavy Trucking (*in a benefit for "All You Can Eat") at Records Hall on the campus of Rutgers University in New Brunswick, NJ on 8/5/1973.

Designer/artist not credited, extra-thick cardboard stock card/poster is in used (B-) condition; there is a 1" diagonal wedge of paper missing from the upper right corner tip, along with heavy wear/creasing and multiple pin/staple holes in the other three corners, a series of glue residue/moisture stains, a large dark drip stain on the reverse that bleeds through to the front, tape marks, heavy creasing- the pictures should really tell the story with this one, it's definitely been around the proverbial block a few times. That said, this is one scarce puppy... I couldn't find any references to this poster or this show anywhere, but it clearly looks like it was displayed to advertise the show and it for sure originated in the Columbia Records promotional department, so who knows? Perhaps an undiscovered early Springsteen show? *UPDATE 11/30- SHOW CONFIRMED/SEE BELOW: from an attendee;

i see in the description that it is uncertain if the concert ever happened and i can attest that it did as we all attended not sure if this adds to the provenance or not but this show most definitely happened at a site called "the ledge" typical local college concert site with a stage and floor seating clarence clemmons was on board at the time and gary tallent wore a baseball uniform it was a very informal concert and at the end of "spirit in the night" they rehearsed/played with rutgers students staff to give them a "broadway fade" as bruce put it... so they would play the ending and as the spotlights dimmed they would slowly walk back from the front of the stage was a great concert.