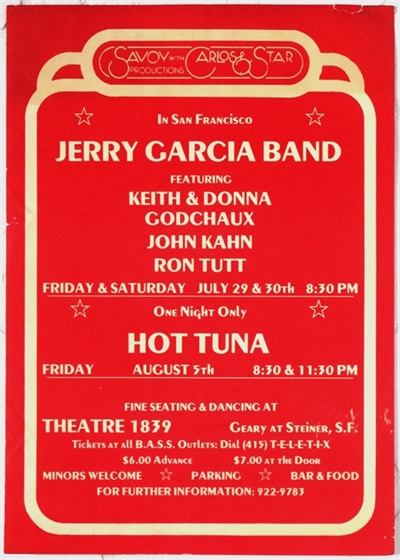 Designer unknown (very basic schedule/boxing-style design), medium-thick flat vellum stock poster is in good/decent (B/B-) condition; there are a couple of fairly pronounced horizontal creases traversing the lower two-thirds of the poster, along with multiple staple/pin holes in all four corners and scattered around the outer margin area, a 1&1/2" crescent-shaped wedge of paper in the upper right margin which has been reattached on the reverse with clear tape, a moisture stain and a large diagonal crease/bend running along the bottom margin, light toning, a few tiny stress creases and handling dings here and there... it's fairly obvious this example was removed from public display at the time of the shows by an enthusiastic JGB fan... it definitely has a lot of "character", but it is still a fairly presentable example of a very uncommon Garcia Band poster.