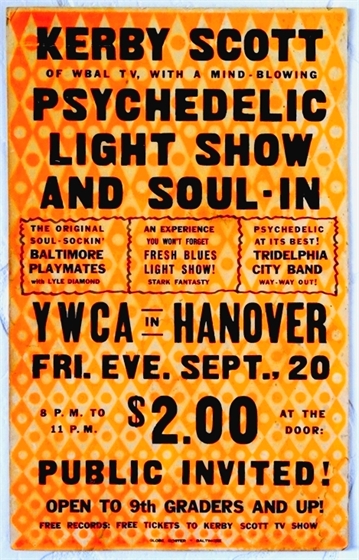 Design by/printed by Globe Poster of Baltimore (MD), extra-thick cardboard stock letterpress poster is in good/decent (B to B/B-) condition; there is a bit of moisture ripple along the lower portion of the poster, along with a fair amount of surface wear (a few smudges, a bit of dirt and light moisture staining), pressure creases in the lower corners and a couple of bends and a bit of wear in the upper left corner, a few stray edge nicks/dings scattered around the outer margin area, a couple of thin horizontal areas of ink cracking across "Kerby", a bit of superfluous hand-embellished magic marker squiggle around the band names, tape marks on the reverse... you get the idea. I have little doubt that this example was removed from public display at the time of the event.

ULTRA-COOL-LOOKING oddball teen dance poster from the Baltimore suburbs with a fairly interesting back story; this event (or a nearly-identical show from around the same time) was more than likely attended by a teenage David Byrne. On pages 39-40 of David's 2012 book, "How Music Works", he talks about going to a show at a local "Teen Center" that featured a pair of bands matching descriptions of the Tridelphia City Band and and the (Baltimore) Playmates, right down to the outfits (*see photo).